What I've Been Reading:
'A Conspiracy of Alchemists' by Liesel Schwarz 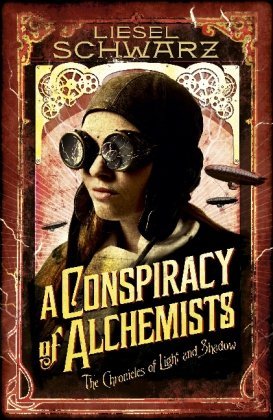 Liesel Schwarz has created a fantastic Steampunk world where Light and Shadow are fighting for supremacy and Magic and Science are bound together in the new advances in technology that are sweeping the world.

Elle Chance is just your everyday Dirigible pilot. She's a woman in a mans world but she has the strength of character to stand her own against those who try and put her down. She's a feminist in the making, preferring trousers over fancy dresses and enjoying a sneaky cigar with the boys far more than flirting with potential suitors. In this respect, I really liked Elle. She's the kind of strong female lead I like, the kind who doesn't sit back and wait for men to get her out of a scrape. And boy, did Elle find herself in plenty of those sticky situations.

The novel opens with Elle accepting a freelance job flying an object from France to England. The job seems a little dodgy but she accepts anyway, payment of an extravagant diamond bracelet too tempting to pass up. But little does she know, accepting that bracelet is just the beginning of her downfall.

On her way to the airfield with the box that she is to fly back to England, Elle is attacked by some seriously Shadowy men intent on getting their hands on her and the box. Although managing fairly well to stand her ground, the mysterious Hugh Marsh comes to her aid. They escape mostly unhurt but without possession of the box. And so begins a crazy dangerous journey into the world of Shadow, Alchemy and Magic.

The story bounces along fairly well with no discernible lulls and enough action and characterisation to keep the reader interested. The relationship that inevitably develops between Elle and mysterious Warlock, Marsh is pretty humorous at times and surprisingly doesn't get in the way of the plot despite romance and steampunk not traditionally being bed-mates.

The steampunk world that Schwarz has created is a strong one that I can't wait to revisit in the second instalment of the trilogy later this year. The concept of Magic is an interesting one that fits in nicely with the steampunk element and even the Vampires (which I'll admit didn't appeal to me at first) turned out to be kind of cool. Loisa in particular stood out for me. As did the fact that Schwarz sticks to the traditional vampire canon rules of avoiding daylight and drinking blood - always a plus for me.

I would definitely recommend this novel to fans of Urban fantasy, steampunk and paranormal romance as it has elements of all three - an unusual trait in fantasy novels but one that I found really interesting. 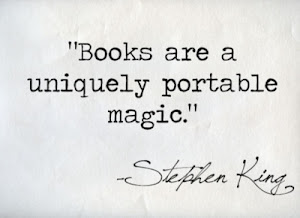